“The President shall from time to time give to Congress information of the State of the Union and recommend to their Consideration such measures as he shall judge necessary and expedient.”
Article II, Sec. 3, U.S. Constitution 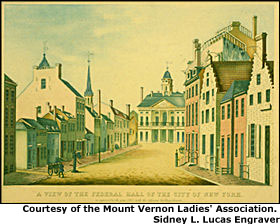 On a cold January morning, the President rode in a carriage drawn by six horses from his residence on Cherry Street in New York to Federal Hall for a joint meeting of the two bodies of Congress, the House of Representatives and the Senate. When George Washington personally delivered the first annual message to Congress on January 8, 1790, he was aware of his constitutional duty to deliver his message and of the precedent he was setting for future presidents.

George Washington rode on a carriage driven by six horses from his house on Cherry Street to Federal Hall in New York to give his deliver his first annual message in person.

The President’s focus, however, was on the very concept of union itself. Washington and his administration were concerned with the challenges of establishing a nation and maintaining a union. The experiment of American democracy was in its infancy. Aware of the need to prove the success of the “union of states,” Washington included a significant detail in his speech. Instead of datelining his message with the name of the nation’s capital, New York, Washington emphasized unity by writing “United States” on the speech’s dateline.

Since Washington’s first speech to Congress, U.S. Presidents have “from time to time” given Congress an assessment of the condition of the union. Presidents have used the opportunity to present their goals and agenda through broad ideas or specific details. The annual message or “State of the Union” message’s length, frequency, and method of delivery have varied from President to President and era to era.

For example, Thomas Jefferson thought Washington’s oral presentation was too kingly for the new republic. Likewise, Congress’s practice of giving a courteous reply in person at the President’s residence was too formal. Jefferson detailed his priorities in his first annual message in 1801 and sent copies of the written message to each house of Congress. The President’s annual message, as it was then called, was not spoken by the President for the next 112 years. The message was often printed in full or as excerpts in newspapers for the American public to read.

The first President to revive Washington’s spoken precedent was Woodrow Wilson in 1913. Although controversial at the time, Wilson delivered his first annual message in person to both houses of Congress and outlined his legislative priorities.

Most annual messages outline the President’s legislative agenda and national priorities in general or specific terms. James Monroe in 1823 discussed the centerpiece of his foreign policy, now-known as the Monroe Doctrine, which called on European countries to end western colonization. Lincoln famously expressed his desire for slave emancipation in 1862, and Franklin Roosevelt spoke about the now-famous four freedoms during his State of the Union message in 1941.

Whatever the form, content, delivery method or broadcast medium, the President’s annual address is a backdrop for national unity. The State of the Union gives the President an opportunity to reflect on the past while presenting his hopes for the future to Congress, the American people and the world.

Return to State of the Union Index of Topics